We've moved the Blue Bluer Books blog to our new website. I hope you'll follow us there.

Thank you for sharing your precious time & attention with us!


Posted by Josh Hockensmith at 3:52 PM No comments:

The Sacred | Profane exhibition officially opens  at 23 Sandy Gallery on Friday evening. I Ching #3: 'Difficulty' is in the show, from my ongoing series of books inspired by the I Ching, as well as Ippy Patterson's Escape from Eden, for which I did the binding. I'm so pleased to be involved with the gallery for the first time, and especially proud after seeing the catalog of other work in the show.

Press release details are below, including a link to the full catalog of the show available for browsing and/or purchase.

SACRED | PROFANE is a juried exhibition of book art focusing on religion and spirituality. For this show we sought out works that take a stand or cross the line between the sacred and the profane, the dichotomy of often-polarizing points of view.

This exhibition features 57 books by 52 artists on topics such as: ritual and ceremony, creation and evolution, myth and memory, heaven and earth, superstition and scholarship, sacred and secular, rites and symbols, traditional and modern, occult and omnipresence, agnostic and atheistic, west and east.

As we all know, religion has a close relationship to books and texts. The Bible, the Quran, the Torah, Buddhist sutras, the Bhagavad Gita, the Dao Dejing, along with many others, are all books deeply religious. With this exhibition, book artists had a chance to explore their own relationships to and rejections of religion and spirituality through the creation of their own sacred and profane artist books.

SACRED | PROFANE was juried by Jim Carmin, who has directed the operations of the John Wilson Special Collections at Multnomah County Library since 1998. Prior to that he was an art librarian at the University of Oregon and sold books, rare and otherwise, at Powell's City of Books in Portland. He has a Bachelor's in studio art and Masters in Library Science from Ball State University, a Masters in Art History from the University of Oregon, and has attended Rare Books School at the University of Virginia with classes in bindings and typography. Related interests include reviewing contemporary fiction for The Oregonian and the Minneapolis-St. Paul Star-Tribune; letterpress printing and bookbinding; and curating exhibitions in literary and book arts. This summer he'll be teaching a course on Medieval manuscripts and early printed books at Portland State University.

A full online catalog for SACRED | PROFANE can be found at:  www.23sandy.com/works/sacredprofane

Posted by Josh Hockensmith at 10:40 PM No comments: 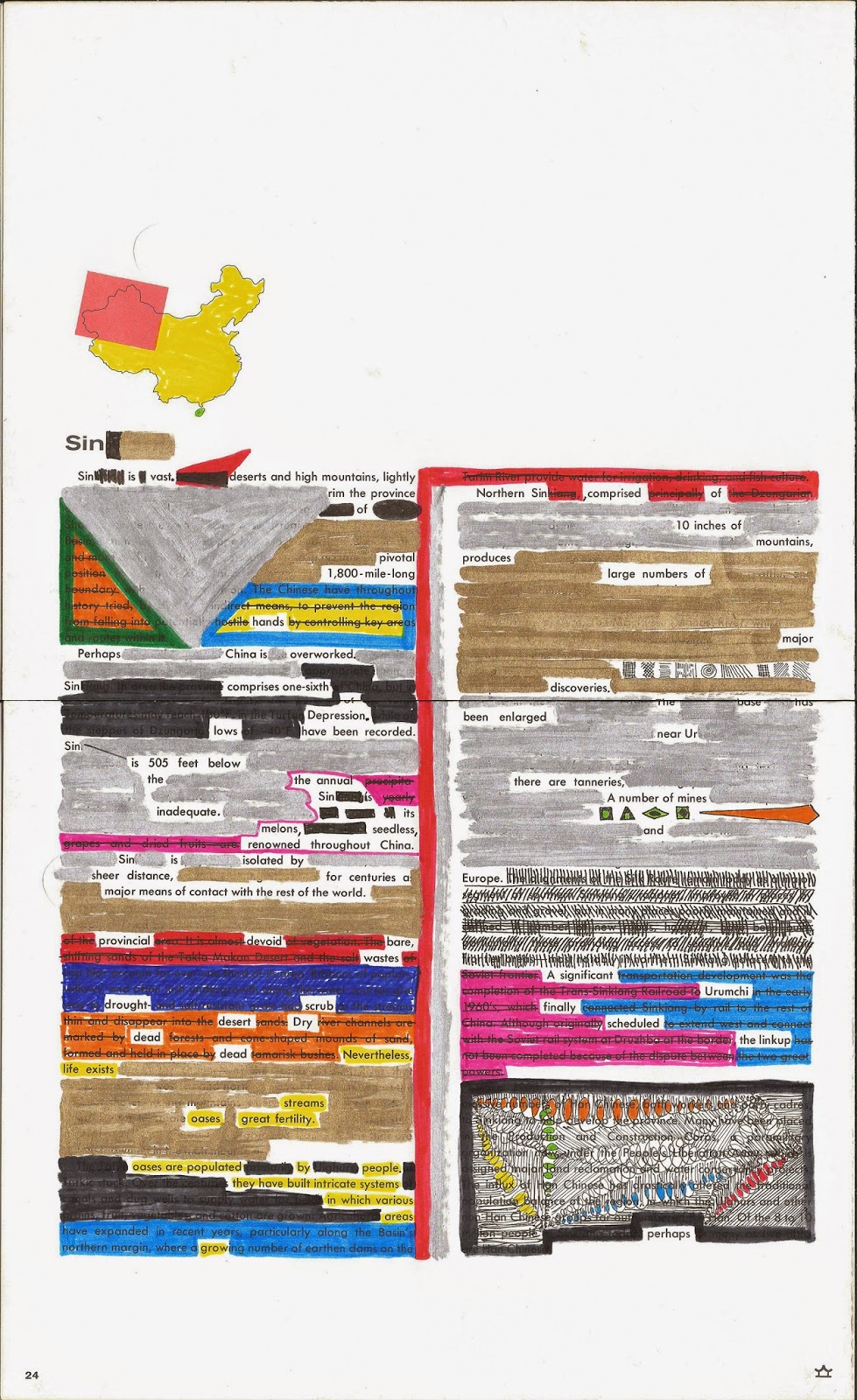 A couple of months ago, Chuck Cave -- a book artist who had recently relocated to the area -- asked if I'd like to collaborate on a book with him for an upcoming show in Lithuania that he had been invited to participate in. Even though we hadn't (still haven't) known each other long, it was pretty obvious that we share some fundamental aesthetic ideas and approaches. We both like to invite chance into our work, and humor.

The result is a book we're calling Verso. We'll have more to share about it soon, but in the meantime here's a part of it in progress. Each copy in the edition will come with a unique 'errata' sheet that we create by altering a folded map page from a large atlas.

Today I've been working on my contribution to the first errata sheet, which will accompany the copy of the book we send for the show.

This page is inspired equally by Tom Phillips's classic A Humument, by Austin Kleon's black-out poetry, and by another of my all-time favorite bookworks, La Prose du Transsiberien... by Sonia Delaunay and Blaise Cendrars.

Below is the poem as I read it. If you read the poem on the image above, you might put the words in a different order depending on how you map out their relationships on the altered page...

Sin comprises one-sixth
of
Depression.
lows have been recorded.
Sin
is 505 feet below
the
inadequate.

the annual
Sin is
its
melons, seedless,
renowned throughout China.
Sin is isolated by
sheer distance, for centuries a
major means of contact with the rest of the world.

oases are populated by people.
they have built intricate systems
in which various
areas

discoveries.
The base has
been enlarged
near Ur

there are tanneries,
A number of mines

Posted by Josh Hockensmith at 11:58 PM No comments:

Some years ago now, a magical opportunity fell into my bookbinding lap. Poet/friend/general facilitator of magical opportunities Jeffery Beam and I had just worked together on a small handbound run of his book, Visions of Dame Kind. When Jeffery learned that his friend and neighbor Ippy Patterson was interested in creating a book out of her recent drawings, Escape from Eden, he put her in touch with me.

You can see from the photos why I was in, immediately. Ippy's rapidograph drawings are stunning, and the visual narrative is perfect for the accordion book format.

We made the first copies of the edition in 2005 (9 or 10 copies, I believe, out of a planned edition of 20), and then took a breather as they made their way into the world. I'm thrilled to be working on a fresh round of copies for some new shows and events that Ippy has coming up later in the year.


As impressive as the drawings are from page to page, they're even more so when you spread the accordion to its full 10' length.


The opposite side of the accordion features a poem that resonates with Ippy's drawing: "Paradise," by Keith Waldrop.

In the first round of binding, we created copies with three different bindings: a beige/gold, a rusty brown, and a burgundy. For the next couple of copies we are sticking to one color: Canapetta's natural cotton/linen bookcloth.

As much as I enjoy making artists' books with my own content, this project is a reminder that sometimes the greater joy is creating a book whose primary purpose is to support and showcase someone else's work, while I slip into the background.

Looks like tomorrow's not going to be quite as beautiful a spring day as today was, but still a great afternoon to come out from hibernation to Pittsboro First Sunday. Lisa Gilbert and I will be at Liquidambar to celebrate the opening of our two-month, two-person show of artists' books and handmade blank books.

Here's a little preview of a new book that I'll be showing there: I Ching #3: "Difficulty" 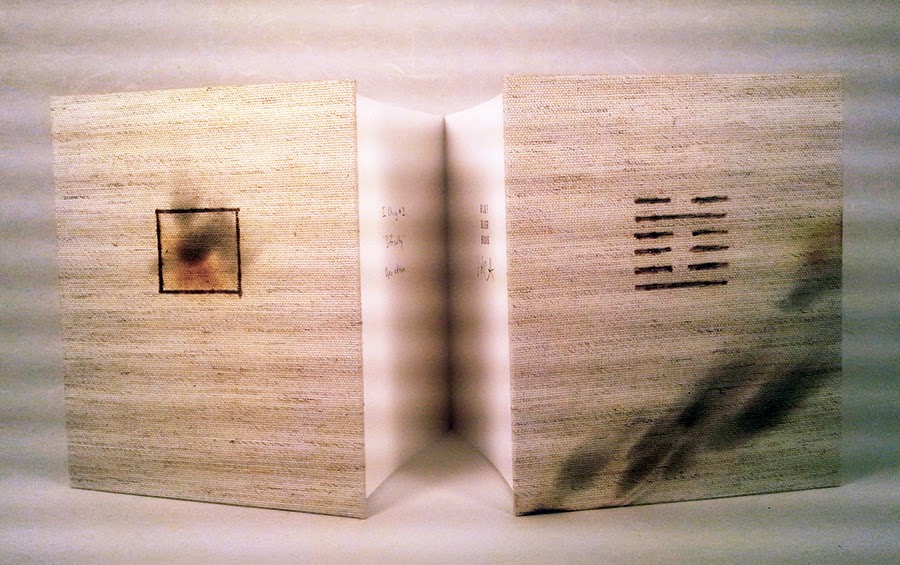 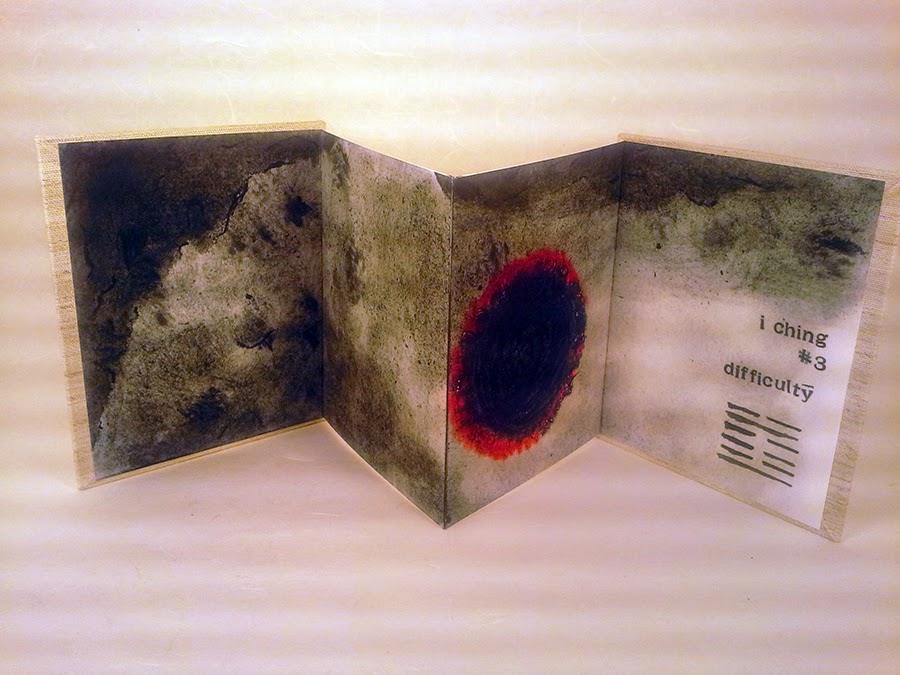 (Please pardon the shadow stripes. This is the best I've been able to edit them out, and can't re-shoot the books because they're currently at the gallery. I'll re-shoot as soon as I have the next copy finished.)

This is the second book I've completed in the I Ching series. Like I Ching #64: "Unfinished," this one is also based on a sumi-e original that I then scanned and made archival inkjet prints of. The covers of each copy are decorated with unique burn and smoke marks, as well as some work done with a soldering iron. It will be an open edition.

Also debuting at the show will be the commercially printed edition of Doctor Mister Miracles's Guide to Miracle-Making: A Manual (Abridged).

Hope you can join us at the reception! If not, though, the show will be up until May 25th so there's plenty of time. You'll even have a chance to join us for another reception at the next First Sunday on the afternoon of May 4th.
Posted by Josh Hockensmith at 7:44 PM No comments:

After an unusually wintry winter here in North Carolina, today the air had a distinct smell of green to it. Not the green beer of St. Patrick's Day (although there may still be a whiff of that around), and not yet the visible yellow-green tinge of pine pollen in the air. Just the first, barely noticeable taste of Spring. And the much more noticeable increase in temperature to 70 degrees.

With Spring this year has come an exciting opportunity. My work and Lisa Gilbert's work will be featured in a wonderful little gallery in downtown Pittsboro called Liquidambar. Here are details:

I'll be showing a mix of work--old and new, artists' books and handmade blank books of different kinds. Depending on space constraints, the giant Book of Mister Miracles may make another appearance, along with his smaller cousin Doctor Mister Miracles's Guide to Miracle-Making: A Manual (Abridged).

I've also just had a larger edition of DMM'sGtM-M:AM(A) printed, which I'll be picking up from the printshop tomorrow. It consists of scans of my favorite version of each page from the original edition compiled into a new version and digitally printed. It's my first foray into publishing a larger edition (100 copies) that's neither print-on-demand nor an open-ended edition of handmade copies, and I'm excited to see how it goes.

There will be copies of Surf Book #3 at Liquidambar, too, as well as copies of I Ching #64: 'Unfinished.'

There's other new work in the works, but it's not quite ready to be photographed yet. A scroll inspired by the flooding Haw River, painted using water from the river itself; and a new book in the I Ching series: I Ching #3: 'Difficulty.'

I'll see if we can't post some photos of the newer work before the show opens, but if we don't, I hope you'll come out to Liquidambar and be surprised.

Posted by Josh Hockensmith at 10:49 PM No comments:

When you haven't heard from me in a while, you can assume I've been busy in the studio...

The past couple of weekends have been big for the Mister Miracles giant book project! (Click here for a reminder of what the project's all about and to see what the empty giant book looks like...)  Last weekend Rio did a 24-hour-long drawing blitz to create panels for it, and this weekend I've been putting together the large panels for the front of the book.

Have to get back in the studio to continue working on it, but here are some teaser photos of the first panel, which will be the book's title page! 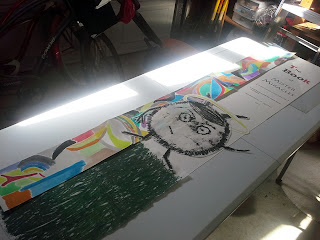 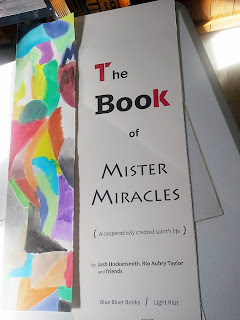 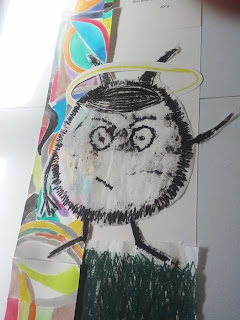 Posted by Josh Hockensmith at 12:25 PM No comments:

Josh Hockensmith
I am a book artist, writer, and art library assistant living in Pittsboro, NC. I produce artists' books and handmade blank books under the name Blue Bluer Books. My day job is as the library assistant at Joseph C. Sloane Art Library, at the University of North Carolina-Chapel Hill. I am also the editor of South x Southeast: Journal of Haiku and Haiku Arts.